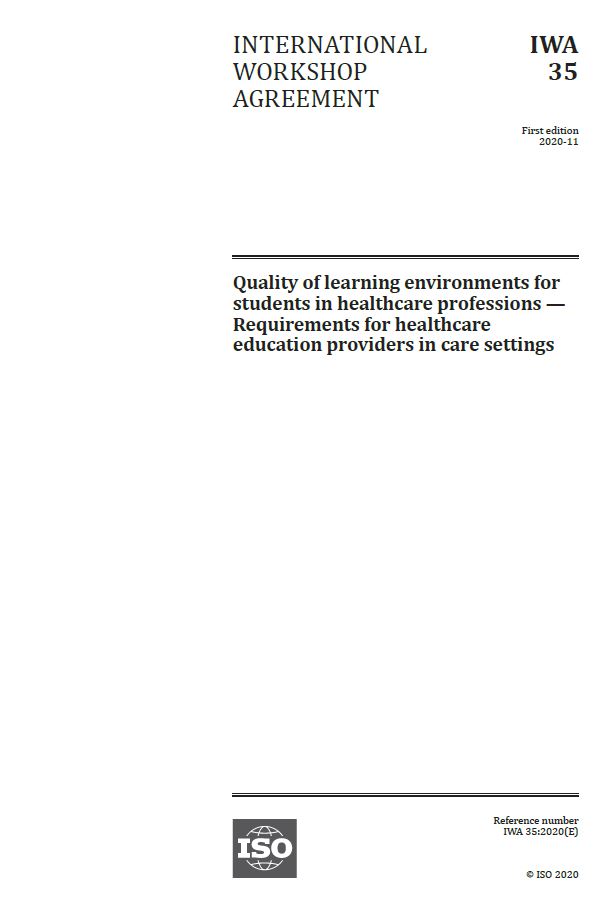 This is a milestone for the HEALINT project, as it upgrades one of its intellectual outputs from the status of proprietary to formal standardization document, thus assuring its sustainability after the project lifetime by handing it over to ISO members across the world for future continuous development.

“Formal” standardization documents are those published by Bodies who are signatories of the World Trade Organization Technical Barriers to Trade Agreement (WTO-TBT Agreement), containing the Code of Good Practices for the Preparation, Adoption and Application of Standards. Examples of such Bodies, with different geographic scopes are: British Standards Institute (BSI) – the United Kingdom National Standardization Body; European Standardization Committee (CEN); and the International Organizational for Standardization (ISO).

The WTO-TBT Code of Good Practices is reflected at these bodies’ internal operational procedures (IPQ Procedures, CEN Internal Regulations; ISO Directives). In practice this means documents published by them are developed in strict respect of principles such as

which increase its credibility in the market. Documents published by other entities are considered “proprietary” standardization documents and do not have a way to assure users of their method of development. Nor do they fall under the mandatory systematic review protocol followed by standardization bodies, which assures its continuous development. This can negatively affect the future exploitation and sustainability of these documents.

In this framework, the HEALINT Protocol is considered a proprietary standardization document and, in order to increase its dissemination, expand its exploitation potential and assure its sustainability after the project lifetime, the HEALINT Consortium, taking advantage of one of its partners’ (KIC) experience in the formal standardization world, presented the HEALINT Protocol to BSI, and proposed it as a new work item to be published as an International Workshop Agreement (IWA) through ISO. The proposal was approved and included in the BSI Work Plan for 2020. BSI submitted it to ISO and after a two months Ballot, ISO members across the globe agreed to its development.

Renamed “Quality of learning environments for students in the healthcare professions – Requirements for healthcare education providers in care settings“, IWA 35, based on the HEALINT Protocol, was developed by a group of 87 Experts, representing 71 organizations from 25 countries across the globe, including representatives of the HEALINT Consortium partners. The participants started with the base text provided by the HEALINT Protocol and transformed it into a version which reflects the international consensus.

The group held six online meetings in the spring-summer 2020, at different times to make participation accessible across different hemispheres, with an average of 40 participants per meeting. The participants worked tirelessly for long hours and the meetings had lively discussions with many different points of view being shared by participants from different cultures, all held in good spirits and tempered with a dose of good humour, under the moderation of the co-convenors (Carol Hall and Sandra Feliciano, from the University of Nothingham and the Knowledge Innovation Centre, respectively) and the brilliant guidance of the experienced Sally Swingewood from the British Standards Institute (BSI), which was of paramount importance for the effectiveness and efficiency of the work at hand and the success of its results.

The original HEALINT Protocol can be downloaded in four languages (EN, ES, FI, PL) at the HEALINT website.

IWA 35 can now be purchased at the ISO store.

For more information on the HEALINT Protocol and IWA 35, please contact sandra@knowledgeinnovation.eu

This is a notification that can be used for cookie consent or other important news. It also got a modal window now! Click "learn more" to see it!

We may request cookies to be set on your device. We use cookies to let us know when you visit our websites, how you interact with us, to enrich your user experience, and to customize your relationship with our website.

Click on the different category headings to find out more. You can also change some of your preferences. Note that blocking some types of cookies may impact your experience on our websites and the services we are able to offer.

These cookies are strictly necessary to provide you with services available through our website and to use some of its features.

Because these cookies are strictly necessary to deliver the website, refusing them will have impact how our site functions. You always can block or delete cookies by changing your browser settings and force blocking all cookies on this website. But this will always prompt you to accept/refuse cookies when revisiting our site.

We fully respect if you want to refuse cookies but to avoid asking you again and again kindly allow us to store a cookie for that. You are free to opt out any time or opt in for other cookies to get a better experience. If you refuse cookies we will remove all set cookies in our domain.

We provide you with a list of stored cookies on your computer in our domain so you can check what we stored. Due to security reasons we are not able to show or modify cookies from other domains. You can check these in your browser security settings.

These cookies collect information that is used either in aggregate form to help us understand how our website is being used or how effective our marketing campaigns are, or to help us customize our website and application for you in order to enhance your experience.

If you do not want that we track your visit to our site you can disable tracking in your browser here:

We also use different external services like Google Webfonts, Google Maps, and external Video providers. Since these providers may collect personal data like your IP address we allow you to block them here. Please be aware that this might heavily reduce the functionality and appearance of our site. Changes will take effect once you reload the page.

The following cookies are also needed - You can choose if you want to allow them: